Flamingos are a type of bird you often see in captivity, especially at zoos. However, since they are so social in nature there has to be a large number of them. This means a wide open space for them to interact on. Flamingos are often one of the animals that can draw large crowds to the zoo setting though. They are both beautiful to look at and it is fascinating to observe some of their behaviors.

One of the biggest changes for Flamingos in captivity is the source of their food. They get pellets that have everything they need in them. These pellets also have the right pigmentation for the Flamingos to keep their color of feathers. In the wild that pigmentation comes from the Beta Carotene in their diet. Without it, they would lose the reds, pinks, and oranges that this animal is so well known for on its feathers.

The life span for Flamingos in captivity is up to 50 years. This is compared to 25 or 30 years in the wild so that shows they do very well in such an environment. However, there is plenty of opposition to it out there in society. Many conservation groups as well as animal rights groups feel that such settings are a poor excuse for efforts to help them to survive in their natural environment.

Those in captivity though has offered a great source of research for us to learn from. In fact, the information on how they live and thrive has helped to make live for those in the wild better. The fact that it gives us an idea of what things are detrimental to their environment is very important. Many people love the Flamingo and without them being in zoos in captivity they would never get to see them in person.

With strict guidelines in place too for entities to have Flamingos in captivity, they are in very good hands. Efforts have been made to help them have an environment that they can adjust to very well. There are low levels of stress and very few of them do escape by flying away. They fact that they don’t attempt to leave this new environment is a key indicator that it is one they are happy with. 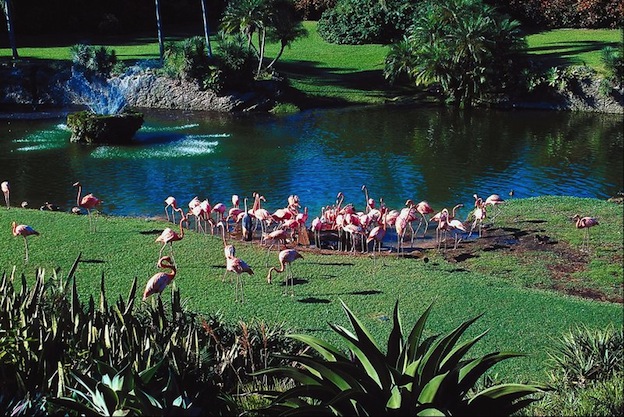 Keeping a good eye on the overall health of the Flamingos helps to keep problems with bacteria and diseases to a minimum. It also helps to identify such factors that may kill large numbers of them out there in the wild. Such early intervention to prevent these types of outbreaks can help ensure the number of them in the wild stays where it is without large dips that cause concerns.

One problem with the many areas that Flamingos are held in captivity though is the breeding. They need to have plenty of rain in order for that process to take place. There are many locations though where they are held that get very little rain. As a result there is a lower chance that reproduction is going to occur.

Yet being able to observe the mating rituals that do occur as well as the hatching of the offspring from the eggs is a great experience that can be watched and evaluated in captivity. Those that do mate and lay eggs will have a better chance of survival without the predators around to take them or humans to take them for their own consumption. Right now the practice of large numbers of them in captivity continues, but mainly due to the fact that they aren’t happy in small numbers so larger groups are offered.