When Flamingos are about 6 years of age they are ready to start mating. This will take place within their own colony. Since some of them are extremely large though there is no shortage of finding a mate. They will pair off rather than males mating with several different females as some types of animals do, but can be monogamous too.

They engage in a variety of courtship rituals in order to find their mate. Most of them are initiated by the males. If they are impressive enough to a female she will decide to pair up with him. If not, then a male has to continue looking for another female that he can woe. These courtship rituals include marching, preening, head turning, and more.

What is very interesting to researchers is that Flamingos don’t mate annually. What has been discovered is that mating usually will take place when it rains. This is because the rain helps them to have supplies for building nests. It also helps to increase the food supply. Therefore when there is a drought the Flamingos are less likely to mate. 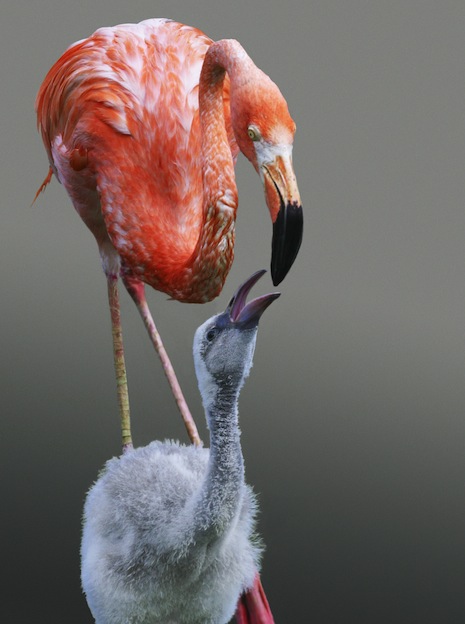 Once mating has occurred, the next step for the Flamingos is to create nests. This is where they will lay their eggs. They use a variety of items to create it including sticks, stones, mud, and even feathers. You will find that these nests look like small volcanoes when they are completed.

Both parents help to build the nest which can be up to 12 inches high when they are done. It is tedious work too and it can take up to 6 weeks for the job to be done. Not long after the nest is done an egg is deposited by the female. They egg is very large and it is rare that more than one egg will be laid by any female Flamingo.

The parents take turns incubating and protecting the egg after it is in the nest. It will take from 27 to 31 days for the offspring to be born. They offspring have feathers of gray or white, not the pinks and reds that people expect. That occurs later in life though due to their diet. Typically it will take about 3 years for the change to occur. 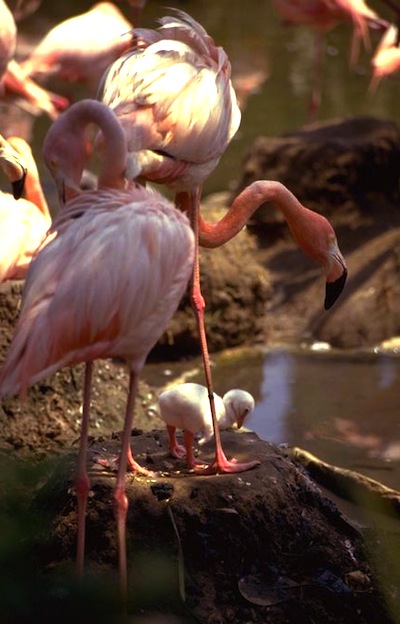 Flamingo caring for their chick

The offspring remain in their nest for about a week under the constant care of their own parents. Here they are fed a diet of crop milk that comes from the upper digestive system of both of their parents. It has a dark red tint to it and offers the young a large supply of fat and protein. Then they join the colony and a group of adults will care for all of the offspring.

Since the Flamingo has very few predators the young are usually quite safe within these colonies. They are taught how to swim and how to hunt by the adults in the group. A lack of food at times, diseases and parasites, and even getting trampled by the adult Flamingos are the biggest threats to them. Humans continue to be a threat to the natural habitats of these animals though which can even prevent reproduction from occurring. It also makes the survival of the offspring harder than it used to be.