What facts do you know about the flamingo? There are many rumors about them so now is the time to find out the truth. For example they are well known for standing on one leg but what does that mean? The fact of this matter is that experts still don’t know what the purpose of that really is. Everything you find out about it is either theory or myth. Here are some other great facts about flamingos for you to explore.

Flamingos are definitely able to fly but they rarely do so. Most people assume that they are land animals only. This is due to the fact that is were they are most likely to see them. They are also extremely good swimmers.

Some Flamingos live in the Andes Mountain area. They can really live anywhere that provides them with water or mud and plenty of food. The reason that their feathers are pink or red is due to the foods that they consume. They high amount of Beta Carotene in them is what colors them.

This is why it is so surprising to people to find the offspring to feature feathers that are white or gray. As they get older though and consume more of the diet for that species of Flamingo they will develop shades of red or pink in them. This takes about 3 years though.

The types of foods that Flamingos consume depends on where they live and the shape of their beaks. The diet will consist of a variety of mollusks and crustaceans. They also consume large amounts of blue and green algae. This helps to keep the water clean and the Flamingos have a digestive system that is well set up for this type of food consumption.

Flamingos are often seen stomping their webbed feet in the mud. Some people think this is to show aggression or to cool off their feet. However, it is actually a process of helping them to get their food sources to come to the surface of the water. That makes it easier for them to find what is readily available. 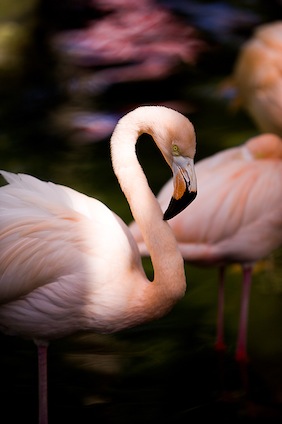 The mating season for Flamingos seems to be tied into the rainy season instead of just a particular time of the year. The less rain there is the less likely they are to mate. In some years due to the lack of rainfall a colony of them won’t mate at all.

Flamingos take very good care of their offspring and they also help with the raising of the young of others in their colony. It is often a group effort to keep the needs of them properly taken care of.

You may find areas where the Flamingos live with lots of nests or with very few. They only nest when they have mated so that they have a place to lay their eggs. Both the males and the females help to build the nest, to incubate the eggs, and to feed the offspring crop milk for the first week of life.

Flamingos don’t regurgitate their food for the young like other types of birds. This is one of the biggest misconceptions about Flamingos that continues to circulate.

They breathe air but have an amazing capacity to hold their breath while they are under the water foraging for food.

They are known to sleep and they can do so standing up or laying down. They may sleep on one leg and then shift their weight to the other one without waking up. It is believed that a portion of their brain sleeps at a time so that they don’t lose their balance.